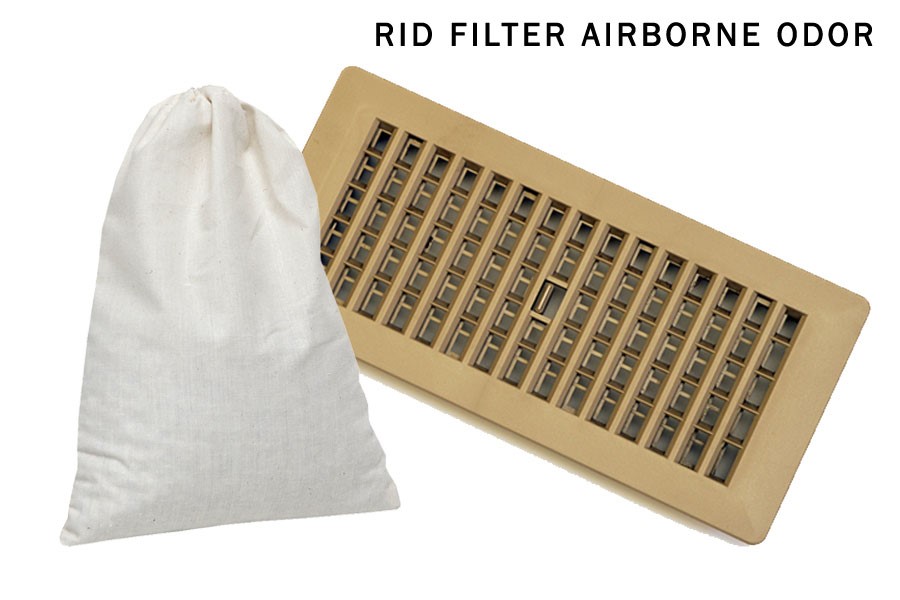 Dead animals create a smell so intense that even when the carcass is removed, the terrible odor can remain for some time. If the dead animal is in or near air ducts that confined odor problem can be distributed throughout the house. Eliminating air borne dead animal smells in air ducts requires an odor removal product specifically developed to eradicate dead animal smells at the molecular level. Smelleze® Reusable Dead Animal Smell Eliminator Pouches are designed to absorb and remove odor molecules from the air, resulting in a complete, natural elimination of the dead animal smell in air ducts.

Dealing with the unforgettable stench of a dead animal can involve a lot of work, patience, and time. And, if the stink showed up at an inopportune time, say the day before your daughter’s backyard wedding reception or a long-awaited family reunion, things can get downright complicated.

Whether a special event was threatened by your dead animal smell encounter or not, you had to try to remove the stink source, the dead animal, and then somehow freshen the air. Most of us grab spray air fresheners, scented candles or incense – anything to mask the foul dead animal smell – and these efforts would create an atmosphere of floral- or spice-scented dead animal smell.

The problem of dead animal smells that seem to emanate from your air ducts, possibly long after the overall smell seems to be gone is normally due to the dead animal being in, on, or very near your heating/cooling ductwork. The heat from your furnace can intensify any lingering fluids or solids in the final stages of decomposition, sending fresh waves of stench through the house. Ductwork can accumulate condensation during air conditioner cycles, especially if the weather is very humid. This moisture can slow decomposition, and again send the funky odors through your house.

What if, after getting rid of the dead animal and fragrance-bombing the entire house, that dead animal reek returns every time you turn on the furnace or air conditioner? How can you exorcise the ghosts of dead animal smells past?

Since fragrance sprays do not destroy odor molecules, they are only capable of filling the air with micro-mists of chemicals that eventually land on and adhere to your floors, walls, furniture – anything they touch.

To eliminate a dead animal smell, you need the help of an all-natural product, like Smelleze® Reusable Dead Animal Smell Eliminator Pouches, that works at a molecular level to bind with and absorb dead animal odor molecules.

Smelleze® Reusable Dead Animal Smell Eliminator Pouches are designed to continuously work at snuffing out odor molecules, for as long as the dead animal smells last in your air ducts. Each pouch is also reusable, being reactivated by direct sunlight, providing you with months of dead animal smell elimination protection.

Smelleze® Pouches are also easy to use. Simply hang or place a pouch over or near the air vents in your house. Each pouch will capture odor molecules in air that is vented into a room or drawn from a room through a return air vent.

If you are plagued by a continued dead animal smell coming from your air ducts, besides putting the unique and highly effective odor-eliminating properties of Smelleze® Pouches to work for you, we recommend also checking your furnace filter for dead animal smell contamination. If you detect a dead animal smell on the filter, simply replace that filter.

Once your Smelleze® Pouches are in place, you will quickly notice that the lingering dead animal smell coming from your air ducts is reduced, and then disappears altogether. Since each pouch is reusable and can be reactivated in direct sunlight, you are assured of long-lasting dead animal smell elimination.

NoOdor.com developed Smelleze® Dead Animal Smell Eliminator Pouches specifically for the problem of air-borne dead animal smells and is delighted to offer this premium product for use in controlling and eliminating dead animal smells in air ducts. Reusable and containing only all-natural ingredients, Smelleze® Pouches are safe for people, pets, and the planet.