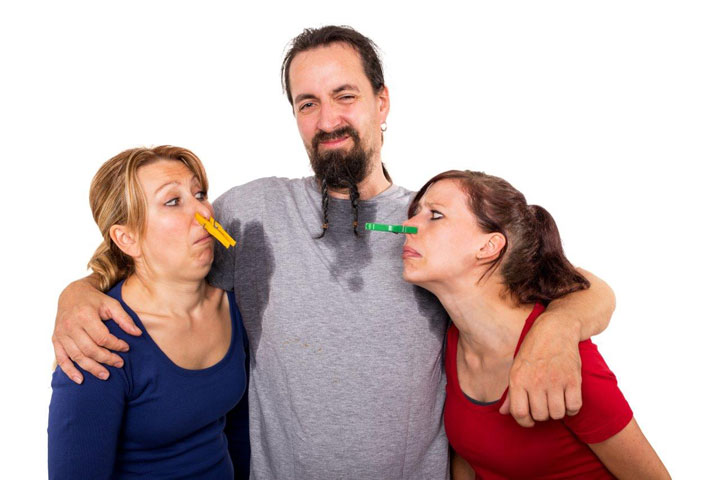 Body odor is unpleasant and most of us look for ways to get rid of this bad smell. However, before trying to look for options that can help us eliminate body smell, it is important to understand what exactly causes this malodor and if it poses any risk to our health. Medically termed as bromhidrosis, osmidrosis or ozochrotia, body odor is caused when bacteria that live on the skin break down protein into certain acids.

A common misconception is that the smell given off by the body is of the bacteria itself when it is actually due to the breakdown of sweat into acid. In humans, body odor becomes evident when a person reaches puberty and is more prevalent in people who eat spicy food or are obese. This problem is common in people with certain medical conditions such as the diabetics who can have strong, repulsive body odors.

People who sweat excessively (a condition known as hyperhidrosis) may also be susceptible to body odor. But in some cases, the salt level in their sweat is too high to be broken down by bacteria and is also dependent on the type of sweat glands involved. Our feet, armpits, belly button, groin, genitals, area behind the ears and pubic hair tend to have more odor than the rest of skin.

Body odor is perceived as unpleasant by most people but this smell can be of great use to dogs and other animals who can use it to identify a person as each individual has a distinct body odor (depending on diet, age, gender and medication taken). This is the reason why sniffer dogs are deployed to search for criminals or predators. They are able to smell their prey across long distances.

When we talk about body malodor two types of acids are at work- Propionic acid and Isovaleric acid.

Note: The average human body has three to four million sweat glands, that are classified into the above mentioned two types.

Understanding the Chemistry of Body Odor

Several compounds are responsible for a variety of body odors, each one being a cocktail of many different chemicals. Metabolic body malodor occurs when one or more of our internal cell enzyme(s), such as the Flavin containing mono-oxygenase3 (FMO3) metabolic enzyme, is deficient. Owing to the deficiency, the enzyme is unable to oxidize odorous substrates to a non-odorous form. As a result, a significant amount of the odorous un-metabolized volatile organic compound (VOC) builds up in the body. Some examples of this condition include Trimethylaminuria (TMAU), Dimethylglycinuria, Isovaleric Acidemia, and others. These conditions are caused mainly due to genetic defects which result in the deficiency of one or more cell enzymes, particularly the group of xenobiotic metabolic enzymes. This condition can also be termed as ‘systemic body odor’ or ‘cell-enzyme saturated body odor’.

Interesting Fact– It is noticed that metabolic body odors are not obvious to family and doctors. This may be due to the fact that very few sufferers of metabolic body odors seem to smell all the time and might not be giving off body odor at the time of the doctor’s visit. In the case of family members or relatives, they might become ‘desensitized’ to the odor problem (acclimatization), especially with prolonged exposure.

There are several ways in which you can fight body odor to eliminate the embarrassing smell. While some of them are related to basic hygiene, others involve the use of special products and formulations to fight off the chemicals that cause body odors.

The above discussion is intended to help you understand the background of body odor, its causes, chemical composition, and how to get rid of the smell. For the best body odor removal products, please visit Noodor.com.