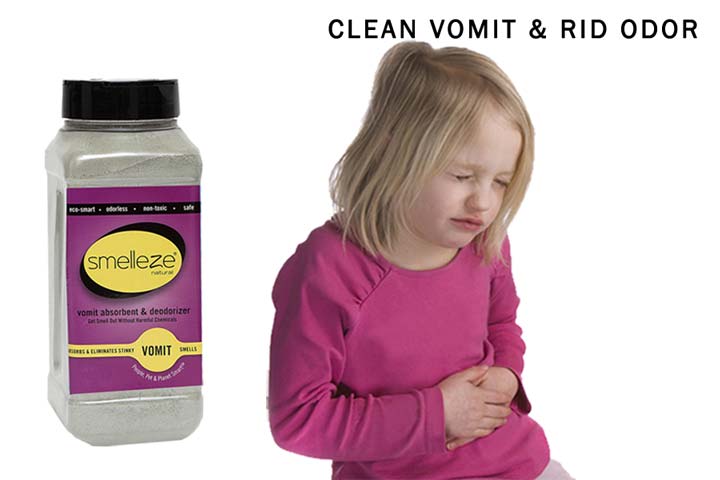 Vomit is actually really helpful from a biological perspective. Basically if you have something inside you which shouldn’t be there, you want to get it out as quickly as possible and vomiting is far quicker than waiting for the body to metabolize whatever it is that’s causing the problem (if it can). From the perspective of managing a house, however, vomit odors are definitely not helpful, but the reality is everyone (human and animal) gets an upset stomach from time to time and is not necessarily going to make it to the bathroom or even understand the idea that they ought to try to get to the bathroom. Because of this, knowing how to eliminate vomit odors is very helpful to anyone who manages a home, so here are 4 tips.

Dispose of Vomit Waste Outside

This may seem like stating the obvious, but when you’re in a hurry and your bathroom’s so close by, it may be tempting just to chuck it down the toilet. The problem here is that unless you managed to catch the vomit in a bowl, or similar, which you can just empty into the toilet, you’re going to need to use either an absorbent material like Smelleze®, paper or a cloth to get the vomit waste to the bathroom. If you use paper, you risk clogging up your toilet and if you use cloth then you just transfer the vomit odors to the cloth. Take a little bit of extra time to take the vomit waste outside, it will pay dividends when it comes to dealing with the VOMIT odor.

If you can put it in a Washing Machine

It may seem like a foul job, actually it is, but do whatever you can to get off all the vomit solids before you put the item in a machine. This isn’t so much to do with treating the smell, it’s to do with preserving your expensive washing machine. Once you’ve done this, you need to make a judgement call. If you’re not planning on doing laundry straight away then you could dust the item/s with Smelleze® Natural Vomit Absorbent & Deodorizer Powder to deal with the smell while you collect enough items to justify putting on a load of laundry.

If you are planning on doing laundry then you have a couple of options. If there’s only a small amount of fairly mild-smelling vomit (such as baby vomit), then you could just add some Odoreze® Natural Laundry Deodorizing Additive Concentrate to your load alongside your standard detergent. If the smell is stronger, then we’d suggest you presoak the item(s) with some Odoreze® Natural Laundry Deodorizing Additive Concentrate and then put them on a prewash by themselves to remove the odor molecules and then put on your normal load with another helping of Odoreze® to ensure that the job is properly finished off.

If you can’t put it in a Washing Machine

Use Smelleze® Natural Vomit Absorbent & Deodorizer Powder which will deal with vomit smells on both soft and hard surfaces. The one big plus point about vomit, as compared to urine, is that it’s far more difficult for it to soak through carpet and into the underlay.

In adults, vomiting usually occurs for physical reasons and while this is often the case for children and animals too, it can also be a stress reaction, so when travelling do everything you can to make the journey pleasant for them and, in particular, make sure they get plenty of air, even in winter, and also water (likewise but particularly in summer). This means you will also need to allow for comfort breaks, which, ideally, should do double-duty as a chance for them to stretch their legs. As a precaution, take along some Smelleze® Natural Vomit Absorbent & Deodorizer Powder, which can be used even on public transport and which works quickly as well as effectively.