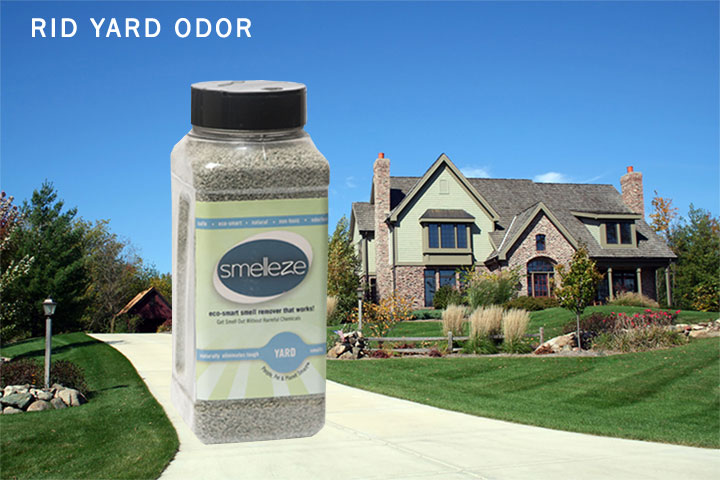 Whether it’s your own furry friends, neighborhood cats or local wildlife, animals can be as smelly as they are enchanting, there’s really no two ways about it. Fortunately, there are ways you can deal with animal odors, both outside and inside.

Let’s start without outside, since that’s probably the place you have least direct control over animal behavior. Least, however, does not mean none. First up, if you have responsibility for fencing your garden, use it well, good fences or other barriers will keep out at least some of the local wildlife. Secondly, do not encourage unwanted wildlife. Putting a bird-feeder in your garden is one thing, making your garbage, specifically your food waste, a tempting target for local animals is another. Leaving aside the fact that you probably don’t want your trash can (or recycling bins) literally turned over, what goes in one end comes out the other and you don’t want that other end being emptied in your garden.

If, however, you do find yourself having to deal with animal odors outside, then it’s important to do so in the right way. There are two common animal-related odors which can make their way into the average garden, one is skunk spray and the other is urine or feces. For skunk spray reach straight for Smelleze® Natural Skunked Animal Smell Removal Powder, which can go on your poor pet (if it’s unfortunate enough to have been sprayed) or anywhere in the garden where the smell lingers. For urine, we’d suggest sprinkling Smelleze® Natural Yard Animal Waste Smell Removal Deodorizer Granules since they’re effective, safe, convenient, and long-lasting. It works much better than yard liquid spray deodorizers that lose their effectiveness shortly after they evaporate.

The bad news is that pet odors can be even more obvious in an indoor space (particularly a small one) than they are in an outdoor space (even a small one). The good news is that you have much more control over an indoor space than an outdoor one, hence you’re in a better position to tackle them. To begin with you can get your odor-busting off to a head start by investing in Smelleze® Reusable Pet Smell Neutralizer Pouches and placing them in smelly pet areas.

Top tip – if you have or want to have pets, particularly ones which can wander about the home, then think about that fact when you’re making buying decisions, for example, look for floorcoverings and textiles which are easy to clean, meaning removable (where practical) and machine-washable or steam-washable.

Stop Dirt & Odors at the Door

This is far easier with dogs than cats, but if you can give your pets a quick but thorough clean when they come in from outdoors, then you can stop a lot of pet odors from getting into your home in the first place, plus you have a chance to check your pet for cuts, bruises, insect bites and so on.

Invest in an Automatic Vacuum Cleaner

Getting rid of pet hair (and dander) is a must if you want to banish pet odors, so you either need to vacuum really regularly yourself (as in at least every other day if at all possible) or get a machine to do it for you. The big advantage of the machine is that it leaves you free to vacuum other textiles like upholstery, even if your pets aren’t allowed on furniture, they’re going to come into contact with it.

Pet bedding and human bedding will easily absorb odors, hence the need for regular laundering. If pet toys can go in a machine then put them in as frequently as you can sneak them away. Mattresses can absorb pet odors too and can’t just be tossed in a machine, so put a washable mattress topper on them for a bit of protection (and comfort for the sleeper). Fabric toppers can be put on top of waterproof ones if need be. When washing the bedding, give your regular detergent a helping hand in the form of Odoreze® Natural Laundry Deodorizing Additive for that extra deodorizing power.

Be Ready to Deal Quickly with Accidents

Accidents will happen from time to time, it’s that simple and you want to deal with them as quickly as possible to stop your pets getting the idea that they should use that part of your home as a toilet. This point is so important we suggest you forget experimenting with home remedies and such like, it may seem to you that they’ve worked, but remember most animals have a better sense of smell than humans, in fact dogs are famous for it, just reach for Smelleze® Natural Urine Smell Absorber & Deodorizer Powder which will deal with the odor effectively and quickly. It works thousand times better than baking soda!

Cats are possibly the most fastidious creatures on the planet and they will only use a litter box if it is scrupulously clean. Save your time, money and sanity by removing feces immediately but using Smelleze® Natural Cat Litter Smell Deodorizer Additive to absorb urine smells so you don’t have to remove piles of litter each time your cat just needs a basic comfort stop.