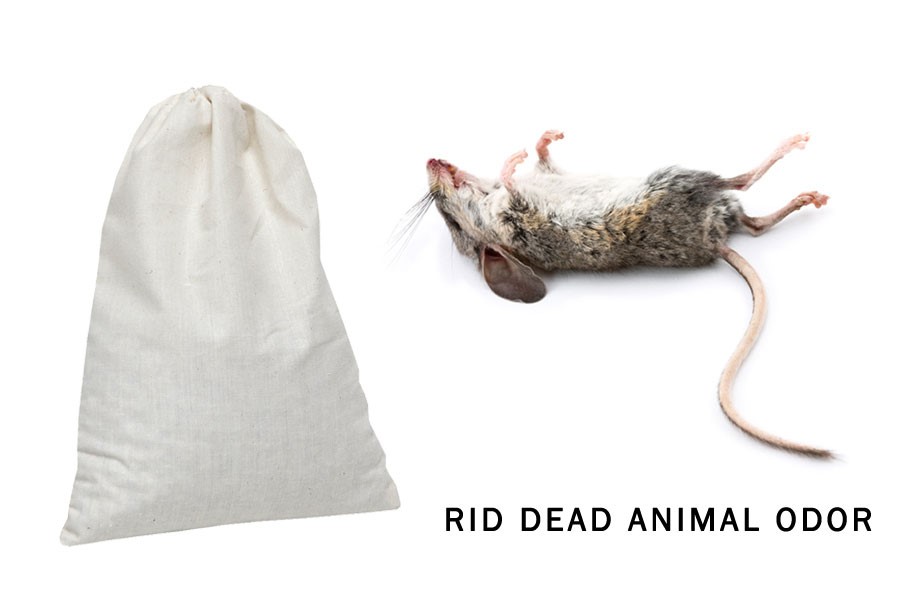 Getting rid of dead animals smells that have your family gagging can seem an impossible task. But, armed with Smelleze® Reusable Dead Animal Smell Eliminator Pouches, you can eradicate these putrid odors at the molecular level. Reduce your dead animal smell risk by blocking access into your home, storing pet foods and other foodstuffs in containers, and cleaning out potential nesting areas. NoOdor.com uses premium all natural ingredients in their reusable Smelleze® Pouches that trap and neutralize odor molecules at the source. Each pouch can be reactivated in sunlight or microwave for years of effective odor-eliminating use.

The awful stench created by a dead animal in your home is a household hazard no one wants to face – or smell! Getting rid of that terrible odor can quickly become all you can think about — as you stand in the front yard, wondering when the neighbors will notice, and calculating how many members of your family can fit into one motel room.

To compound the green fog that’s circling your house, you can’t get to the dead animal, so you’re stuck in that fog until the carcass fully decomposes…

The dead animal smell is caused by a decomposing animal carcass. Somewhere, somehow, an animal has crawled into your house − and died. It may be under your flooring where warm water pipes run or under your refrigerator, or it may have gnawed through wiring, been electrocuted, and is now turning to dead animal mush − inside the wall.

You need a stink destroyer that can eradicate a potentially long-term dead animal smell problem − and do it from the other side of a wall.

The answer to your nose-numbing dead animal smell is to take action with Smelleze® Reusable Dead Animal Smell Eliminator Pouches, which are easy to use, long acting, and reusable.

Each pouch is a proven and extremely effective de-stink weapon, especially when battling the horrible stench of a decomposing animal − even one that is out of reach! The all natural granules in each pouch capture odors by trapping and bonding to odor molecules in the air, eradicating the dead animal smell at the source without needing to come into contact with it.

Eliminating odor at the molecular level means that you’ve counter-acted the stink that results from decomposition, before those odor molecules can escape and travel along the airflow pathways within your home.

Depending on the sizes or numbers of dead animals that are stinking up your home, the stench from the decomposition can last for days, weeks, or even longer! To take care of this long-term dead animal odor, you need long-term smell elimination − and one that works even when you can’t remove the dead animal causing that smell.

Fortunately, Smelleze® Reusable Dead Animal Smell Eliminator Pouches are reusable, allowing you to combat that terrible dead animal stench continuously until the carcass has finally decomposed to dry remains − and no stink.

The 100% all natural granules in each pouch can be quickly re-activated and its odor-eliminating power completely refreshed by popping it into a microwave or placing it in direct sunlight. Discreet, but undeniably effective, Smelleze® pouches will stand between your nose and your dead animal smell until your home is completely odor-free.

How Did This 3-Alarm Smell Happen?

The common House Mouse is most often the culprit when a dead animal smell takes over your home. These opportunistic little rodents will sneak inside your house anywhere they can and need only a ¼-inch opening to do so!

Other critters who crawl, creep, or fly into your home then die and decompose, resulting in a dead animal stench that makes your life miserable are rats, bats, opossums, squirrels, chipmunks, snakes (yes, snakes), and lizards. Your house is vulnerable from rooftop to basement.  All these animals need is a way inside.

The best way to avoid having your home engulfed by the stench of a dead animal is to keep them out of your home. This isn’t as hard as it sounds.

Checking your home for access points is pretty straightforward. The following locations are a good place to start checking, but you may discover others as you look through and around your house.

Besides securing access points, it is also important to secure food sources, such as dry dog or cat foods, as well as put all foodstuffs in containers and regularly take out the trash.

Once you’ve found any critter entry points, you can take steps to keep them out and protect yourself from the nose-hazard of dead animal smells.  Arm yourself with wire mesh or metal tape and simply close off any gaps, even those that seem too small. Remember, an adult mouse only needs a ¼-inch sliver of space to squeeze into your home!

When it comes to dead animals and their nose-hair-curling smell, the common House Mouse is the primary suspect. Let’s look at this little critter and see what makes it tick and why it wants to live in our homes.

House mice are usually the first to breach your home’s perimeter; this is important because their access and habitation can lead other animals to view your house as safe haven.

All About that Dead Animal Smell

Odors are transmitted at a molecular level. This means that they can permeate surfaces, especially through fluids and condensation, or in damp/humid areas. Airflow snatches up odor molecules and can spread the dead animal smell throughout your house.

Several things can affect the intensity of dead animal smells:

All of the above are neutralized with Smelleze® Reusable Dead Animal Smell Eliminator Pouches and the power of their 100% all natural granules. Even when you haven’t been able to remove the dead animal, the most intense dead animal smell can be eradicated at a molecular level by a Smelleze® Pouch placed nearby.

Before the eye-watering dead animal smell took over your house, you may have noticed some warning signs. These might have included:

Take steps to block entry to your home by closing any access points you can find then eliminate any mice that have found a way inside by putting out traps or glue boards.

Professional pest exterminators regularly recommend that homeowners use traps or glue boards when dealing with residential rodent infestations instead of poisons. The most commonly cited reasons are:

Using poison to eliminate or control house mice can increase the potential for the truly horrible problem of having a dead animal smell take over your home.

Beyond the nose-numbing smell a dead animal creates, there are some attendant hazards that should also be taken into account. Mice and rats, as well as any wild critter that takes up residence in your house, are hosts to various parasites, such as fleas, ticks, lice, and mites. These parasites leave their animal host once it dies in search of another host. That might be the nearest mouse or rat, but it can also be your pet or anyone who gets near the dead animal.

Dead animals also attract blowflies and other invasive insects, which can create another pest removal and control issue.

And finally, the continual mouse gnawing creates more and more access into your house for other wildlife, plus destruction of insulation and wiring. The gnawing of electric wires is a common fire hazard, as the mouse may nip the wire, be electrocuted, and leave the shorted wire exposed to combustible materials.

You do not have to tolerate the putrid smell of a dead animal, especially one that has died in a spot that makes it impossible to remove.

NoOdor.com’s Smelleze® Reusable Dead Animal Smell Eliminator Pouches were developed exclusively to get rid of dead animal smells, whether you were able to find and remove the dead animal or not! We understand how disruptive a dead animal smell can be to your home and family, making it nearly intolerable to stay inside.

Our deep experience with odor control and elimination is fully behind you. We know that as fall and winter approach and temperatures outside begin to drop, rodents will be compelled to find warmth to survive. We know this ‘migration’ puts your home at risk for dead animals and the stench they produce.

The good news is: we also know our Smelleze® Reusable Dead Animal Smell Eliminator Pouches are proven effective weapons against dead animal odors. Plus, each pouch is reusable! Simply pop them into your microwave or set in direct sunlight to reactivate for years of use.

So, set your nose free! Get rid of that dead animal odor in your house with Smelleze® Reusable Dead Animal Smell Eliminator Pouches, a proven solution that will keep working until the stink is gone.